This year’s winners of an Ottawa Philanthropy Award don’t have to be reminded that it’s always better to give than to receive.

The seven generous and caring individuals, groups and businesses recognized Wednesday night at the 25th Annual AFP Ottawa Philanthropy Awards have been doing nothing but dish out their time, money, experience and/or skills to help make Ottawa a better place.

The Canada Room at the National Arts Centre was filled with 400 attendees, many of whom were left inspired, proud, humbled and perhaps even blown away after learning that one of the award winners, Dymon Storage, a private Ottawa-based company, is committed to donating half of its operating profits back to the community. 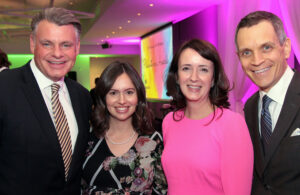 Margot Ault chaired the dinner for her third and final year, cutting it very close to the due date of her first child (three weeks and counting!). She spoke about what a privilege and honour it’s been to have served in her role, and of the positive impact of Ottawa’s philanthropic spirit.

“Philanthropy is where we turn when problems are too big or daunting to tackle alone, and when deserving causes and needs slip through the cracks of our social safety net,” said Ault, manager of philanthropy for The Ottawa Hospital Foundation.

“They reflect the generosity of time and money and sweat and tears that go into bettering public and private institutions, and improving the lives of those who need a helping hand.”

The evening was emceed by 1310 News and Rogers TV host Mark Sutcliffe, who’s also a partner in the Ottawa Business Journal and a former recipient of the AFP’s Outstanding Volunteer Fundraiser award.

On hand were AFP Ottawa board president Teresa Marques, president and CEO of The Rideau Hall Foundation, and Peter Nicholson, president and founder of The Foundation (WCPD), a financial services firm specializing in philanthropy. It was back for its fourth year as the dinner’s presenting sponsor and is also a returning partner in the latest 84-page Giving Guide publication launched that evening. 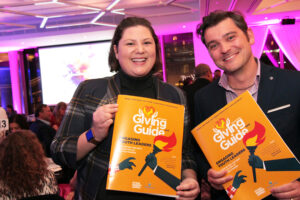 Hussein has raised more than $50,000 for specialized equipment in the CHEO (Children’s Hospital of Eastern Ontario) Neonatal Intensive Care Unit through annual birthday parties that he hosts with his parents at their home. Last year, alone, he raised $15,000.

“Well, here it is: it was a dark and stormy morning,” Hussein began, causing the room to erupt in laughter as he borrowed one of the most famous opening lines in literary history. He continued to share the story of how, as a newborn, he had to be rushed to CHEO’s NICU. “I came into this world, not crying. I couldn’t; my lungs had collapsed and I was struggling to grasp for air.”

Hussein, who’s now perfectly healthy, is striving to raise $11,000 for CHEO’s NICU at his upcoming 11th birthday bash. He spoke about how fun and well-attended his parties are, with magicians, balloon artists, face painting and ball hockey. There’s apparently one thing that’s missing, though. “I’ve been trying to get a Sens player to attend (hint, hint).”

The impressive young man, who delivered parts of his acceptance speech in French, is also the youngest recipient of the Order of the Good Bear, the highest honour bestowed by the CHEO Foundation.

Jim Orban, president and CEO of the University of Ottawa Heart Institute Foundation, landed the Outstanding Fundraising Professional Award, sponsored by Global Philanthropic, for raising more than $100 million for the Heart Institute’s largest-ever campaign. In accepting his award, he shared his recognition with his entire “dream team,” making a point of naming each member and asking them to rise from their seats.

He recalled a quote that he’d seen on a banner two nights earlier, at JNF Ottawa’s Negev Dinner, from Justice Ruth Bader-Ginsburg, associate justice of the Supreme Court of the United States: “If you want to be a true professional, you will do something outside yourself, something to repair tears in your community. Something to make life a little better for people less fortunate than you”.

“That’s what I think a meaningful life is; living not for oneself but for one’s community,” said Orban.

Construction industry leader Paul McCarney was awarded this year’s Outstanding Volunteer Fundraiser, sponsored by his alma mater, Carleton University, where he graduated with a degree in civil engineering.

He has co-chaired the President’s Breakfast for The Ottawa Hospital Foundation, has been a strong leader in its annual The Ride fundraiser, and was involved in its $100-million Legacy Campaign. He’s also been an invaluable supporter of The Royal Ottawa Foundation for Mental Health.

“What motives me or many of you to give back?” McCarney, president and CEO of Clean Water Works, said at the podium. “It’s that will to want to make the community a little better, and to help those who are less fortunate.

“I realized at a young age I had an advantage, a real head start over millions of other kids in this world,” said McCarney, while adding that his father, a general surgeon, and his mother served as excellent role models for him and his five siblings. McCarney’s parents took in a ward of the Children’s Aid Society. As his family of eight quickly became nine, he found himself, at the age 16, serving as a big brother to the boy. One of the other major charities he’s a tremendous booster of is Christie Lake Kids, which helps to provide a better future for kids from economically disadvantaged backgrounds

The Outstanding Corporate Philanthropist Award went to Dymon Storage. It’s been helping The Ottawa Mission since 2012, most recently with its $300,000 gift toward its health clinic to offer primary medical care and dental services to individuals who are homeless, or at risk for homelessness.

“The way I see it, we’re all very fortunate,” said Glen Luckman. “We live in a great country and city, with a society that actually compensates us lucratively when we are successful.”

He spoke about society being built on the success of those who came before us. “Warren Buffett said it so well when he said, ‘Someone is sitting in the shade today because someone planted a tree a long time ago’.

“Most everyone here tonight are, figuratively, planting trees and shading others.”

The crowd broke into applause after Luckman shared how Dymon has committed to donating 50 percent of all operating profits and 50 percent of the growth in the company’s value back to the community.

Ottawa businesswoman Marina Kun received the Outstanding Individual Philanthropist Award, sponsored by PGgrowth, for her support of Ottawa Chamberfest. Her philanthropy has helped the arts organization bring internationally renowned artists to Ottawa to perform at its summer music festival.

“I cannot express adequately the tremendous pleasure and happiness I receive when I’m at a concert and know that I have participated in bringing joy to so many people,” said Kun. “I look at people, and everybody is so happy and smiling.”

Kun is the owner of Kun Shoulder Rest, which manufacturers string-instrument accessories used by musicians around the world. She told the room how she’s always had a love and appreciation for classical music, even though she’s not an accomplished musician nor comes from a musical family. “

She apologized for being at a loss for words, explaining that she’s used to speaking in Spanish, having just returned from a trip to Mexico. After she collected her award and left the stage, Sutcliffe’s quick sense of humour shone through. He thanked Kun and congratulated her— in Spanish.

The Outstanding Philanthropic Group Award went to H.O.P.E. (Helping Other People Everywhere) Volleyball SummerFest. What started as a small event has grown into the world’s largest one-day volleyball event with live entertainment. It has supported more than 110 charities and raised close to $3 million over the past 38 years. The award was accepted by executive director Holly Tarrison-Gaskin.

This year’s Outstanding Small Business Philanthropist Award, sponsored by Brazeau Seller Law, went to Tony Priftakis, owner of Gatineau’s Buffet des Continents. It hosts four to five charity events a year for CHEO. As well, roughly 90 per cent of the restaurant’s 105 employees donate $1 a week from their paycheques to help the children’s hospital. The restaurant has raised $114,000 over the course of 10 years. “The lesson is: you start small, take baby steps, and over the years you can achieve big things,” he said at the podium.