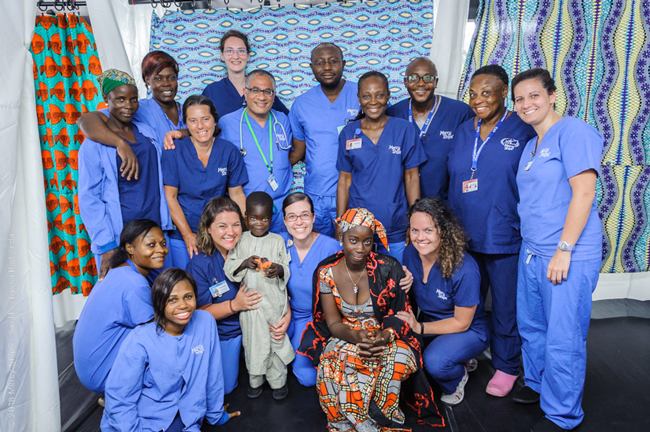 Dr. Sherif Emil reveals a photo to the crowd of a nurse anesthetist attending to a young boy.

Using her right hand, she is squeezing a pump to administer ether, an anesthetic that hasn’t been used in developed nations for decades. Her left hand rests on the  boy’s forehead to check his temporal pulse which reveals his heart rate.  Her eyes peer at the patient’s lips to monitor his oxygen levels, hoping and praying they won’t turn blue. 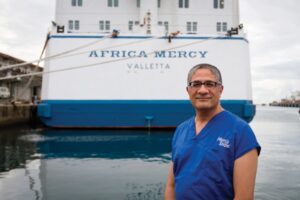 The room has no monitors. The only monitors are her eyes, ears, and fingertips. The photo   was taken at a bush hospital,  in Loliondo, Tanzania during one of Dr. Emil’s missions. While many areas of the world benefit from modern medicine, the overwhelming majority lags far behind.

And then there are the millions, the poorest of the poor, that will never receive an ounce of medical care at all.

It is this somber reality that motivated Dr. Emil, the Director of Pediatric General and Thoracic Surgery at the Montreal Children’s Hospital, to dedicate his time and money to serving with Mercy Ships, an international charity that operates the largest non-governmental hospital ship in the world. It is also why he delivered a presentation to donors at the Rideau Club earlier this week, at an event sponsored by The Foundation (WCPD).

“There are a lot of really great causes out there,” he said.

“But this is a truly unique model of attending to people who would just not get care otherwise. It is not a substitute. It is this, or none. Their mission is to serve the least among us. I can’t think of anything more worthy.”

In its 40 -year history, Mercy Ships has delivered life-saving healthcare and surgeries to tens of thousands of people in some of the poorest places on earth, such as Madagascar, Sierra Leone, the Republic of Congo, Guinea, Cameroon and Benin. Dr. Emil is just one of around 1,600 volunteers at the organization, partly comprised of doctors and nurses that pay their own way to serve on these floating hospitals.

In Dr. Emil’s case, he joined the Board of Mercy Ships in 2014. He went on to serve overseas three times and performed 150 vital surgeries. His most recent stint was for three weeks this past March.

But while Mercy Ships has a rich, dignified history, it is also preparing to turn the page on a new chapter. 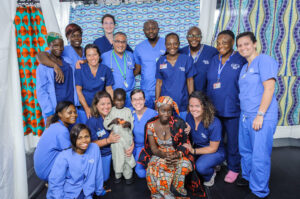 Marilyn Collette, Chair of Mercy Ships Canada, told the crowd at Rideau Club that a brand new ship, the second in its fleet, had recently finished construction. The global organization is now in the midst of a fundraising campaign – approximately $50 million – to outfit the ship as a hospital. The Mercy Ships team has been tasked with raising $1 million in Canada towards the cause.

The new ship was constructed with the help of a Swedish company. On hand at the event was Per Ola Sjogren,  Ambassador of Sweden to Canada, who spoke about the meaningful project. His Excellency Solomon Anu’a Gheyle Azoh-Mbi, High Commissioner for the Republic of Cameroon, also said a few words about the profound impact Mercy Ships has had on his country.

“Marilyn and I are neighours, and as we got to know each other, I was truly touched and wanted to help,” said Peter Nicholson, the President of The Foundation (WCPD), who also delivered remarks that evening on how donors can give more through its flow-through share strategy.

“I had watched a documentary on Mercy Ships before on CBS 60 Minutes, but to listen to Dr. Emil’s story and see some of these images of children in such desperate need, it really puts their struggle in perspective. It is a noble cause and I hope we can make a difference in their fundraising.”

The new ship is expected to be in service by 2020. With two ships soon to be in their fleet, the concept is to have one on each side of Africa – the west and the east – allowing them to deliver far more comprehensive care to those that have none. The organization aims to double the impact they are having in Africa.

For Dr. Emil, who is already planning his fourth service, what strikes him most are the crew and people of Mercy Ships.  The physicians,nurses, and entire Ship community come from all around the world, paying their own expenses and willingly spending time away from their families. This selflessness, he said, creates a dynamic medical environment that rivals even the best operating rooms in the world.

“The idea of Mercy Ships can never work on  paper,” he explained. “It only works in real life.”

To learn more about Mercy Ships, you can visit their website here.