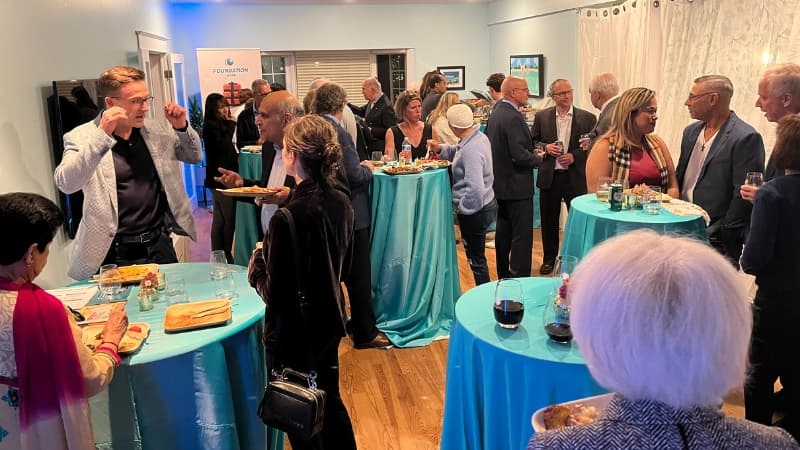 “This feels like family, doesn’t it?” asked Jacqueline Belsito, co-chair of the upcoming Ottawa Philanthropy Awards.

There was a collective laugh, and judging by a sea of nodding heads and warm smiles, it was hard to disagree.

Belsito welcomed nearly 100 people at a Rockcliffe residence last Thursday to kick off the giving season, which will culminate in the 28th Annual AFP Ottawa Philanthropy Awards on November 10.

Affectionately known as The Phils, the event will be once again held at the National Arts Centre. After a fully virtual event in 2020, and a more limited group in 2021, more than 300 attendees are now expected. The Phils will also be live streamed on afpottawa.ca and once again hosted by Sam Laprade, host of CityNews’ hit show, “Hour to Give”.

In a year full of returns to the “new normal”, enthusiasm for The Phils was palpable.

“We have missed the last two years being together, but in some ways we never skipped a beat,” said Peter Nicholson, president and founder of Foundation WCPD, who has served as title sponsor of the Phils for the last eight consecutive years. “This is like the Academy Awards for giving, I really do believe that. We are here to acknowledge our finest and our best.”

Before announcing the winners, Nicholson first motioned to his wife, Anabel, their four children, and a “clan” of extended family members. In the other room, a steaming spread of authentic Filipino food was available, a nod to Nicholson’s diverse family background.

While Foundation WCPD has been a mainstay at The Phils for nearly a decade, a pre-party at the Nicholson family residence has also become somewhat of a tradition.

Nicholson said this was at least the fifth time he has hosted this party, which was created to spark interest in the upcoming event, acknowledge the winners publicly and encourage ticket sales.

“Thank you for taking the time to join us here this evening,” announced Jennifer Gray, development officer at Carleton University and the other co-Chair for the event. “We are so excited to officially celebrate and acknowledge our 2022 philanthropy Award recipients.”

The 2022 winners include a remarkable group of community leaders, many of which were in attendance on Thursday evening.

Also in the room was past winner Logan Hussein, the 2019 recipient of Outstanding Youth Philanthropist, who cheered on the latest winner with his parents, Wael and Sue.

“What makes this event so special, and why we are so happy to support it for so many years, is this sense of continuity and community. It’s special,” Nicholson added.

“Now more than ever, we need events like this to bring us together and remind us of our collective commitment to making positive contributions to the city.”

In addition to Foundation WCPD as Title Sponsor, RBC has announced it will serve as the event’s Dinner Sponsor.

AFP Ottawa is a non-profit organization representing, supporting and uplifting the fundraising sector in our nations’ capital. With nearly 300 members, its network touches every industry and boardroom in the city.