BY: Caroline Phillips, Ottawa Business Journal.
Every day, there are business leaders and ordinary people who are “quietly and conscientiously” working behind the scenes to make our city a better place to live. They give of their time, money and/or expertise, expecting nothing in return, and certainly not a prestigious award from the Ottawa chapter of the Association of Fundraising Professionals. 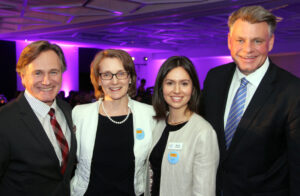 On Wednesday, eight individuals, groups and businesses were fêted for their contributions in front of a crowd of 400-plus during the 24th annual Philanthropy Awards (colloquially known as The Phils).

The awards dinner was held in the National Arts Centre’s new Canada Room overlooking the historic Rideau Canal. It was chaired by Margot Lefebvre, senior development officer at The Ottawa Hospital Foundation. It was once again presented by Peter Nicholson’s Foundation WCPD (Wealth, Creation, Preservation & Donation), a financial services business with a specialty in philanthropic tax planning.

Joel Haslam, producer and host of CTV Ottawa’s Regional Contact, knocked it out of the park as the evening’s informative, thoughtful and witty emcee.

Attendees heard uplifting stories of concerted efforts to feed the hungry, care for the homeless, find medical cures, level the playing field for children, and get people talking more openly about mental illness. “No matter what cause you support or represent, we are joined together tonight in a common goal of making Ottawa and beyond a better place to live, work and play,” said Lefebvre in her remarks. 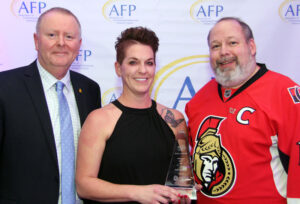 She quoted George Bernard Shaw, who said:  “Some men see things as they are and say, why; I dream of things that never were and say, why not.”

“This room is filled with people who see suffering, unfairness and struggle in our community and immediately ask, ‘Why not, what next, and what more can I do?’ We are a better place because of them.”

Ferguslea Properties/Accora Village owner and past award recipient Dan Greenberg, decked out in his No. 11 Ottawa Senators jersey, presented a special Inspiration Award in honour of Jonathan Pitre, a local hero who raised funds and awareness for his rare and painful skin disease, epidermolysis bullosa (EB). He passed away last spring at age 17, leaving an entire community to mourn his hapless fate.

Three years ago, Pitre attended The Phils as keynote speaker and inspired the room with his courage, optimism and determination.

“He lectured us — good naturedly, mind you — about philanthropy,” Greenberg recalled while expressing great admiration toward his fellow Sens fan. “This is a crowd that already knows philanthropy. This crowd walks, talks and breathes philanthropy and, yet, when Jonathan spoke to us, somehow philanthropy sounded so fresh and so new, almost like something he’d thought of himself.”

The award was graciously accepted by Pitre’s mother, Tina Boileau, who remembered how her son had looked up the word ‘philanthropy’ in preparation for his speech. He found it to mean: love of humanity. “I think every day he showed us that,” she said, tearfully. 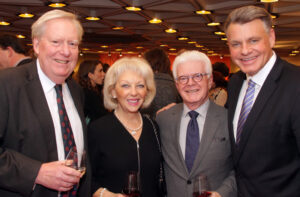 McGahan, CEO of InterRent REIT and president and CEO of CLV Group, was nominated by the Boys and Girls Club of Ottawa for his $1.5 million donation to upgrade the organization’s clubhouse facilities and extend after-school programming for the thousands of children and youth it serves each year. He refused to take credit for the award, though.

“This is not an individual award, this is really about my team,” McGahan said modestly. “I’ve got an amazing group of people. One of the tenets of our company is about giving back and what more can we do. We want to leave a legacy and try and make our community better.”

The awards dinner saw Jayne Watson, the chief executive officer of the National Arts Centre Foundation, named Outstanding Fundraising Professional. Most notably, she and her team at the foundation successfully raised $25 million for a national Creation Fund at the NAC to help artists create new works in theatre, music and dance. 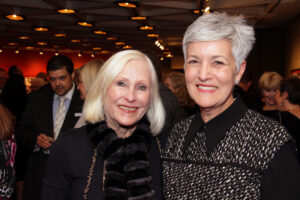 Ottawa lawyer Gregory Sanders, head of Perley-Robertson, Hill & McDougall’s tax law group, was honoured as Outstanding Volunteer Fundraiser. He was nominated for his significant contributions to the Ottawa Regional Cancer Foundation, a charity he became involved with a decade ago after losing both of his parents to cancer. He has previously chaired the boards of The Royal Ottawa Foundation for Mental Health and Ottawa Jewish Community Foundation.

“It’s a unique quality that Gregory has, and he does it in such a way that people welcome his call.”

Sanders recognized that he was “preaching to the converted” while delivering an acceptance speech that gave considerable thought to the subject of philanthropy. In a city of one million, it takes only one percent of the population to give back — with each individual donating $1,000 annually to their favourite cause — to raise $10 million each year, he said. “The more people that get involved in our community, the stronger it gets.”

The award for Outstanding Philanthropic Group went to the Ottawa Dragon Boat Foundation, which has cumulatively raised $4.5 million in support of 50 local charities. It was nominated by the Youth Services Bureau, with festival CEO John Broomanaccepting the award on behalf of all the paddlers. “In the end, we’re just a big family; we’re a community group that bonds together,” said Brooman of the free festival that draws some 80,000 people to Mooney’s Bay. 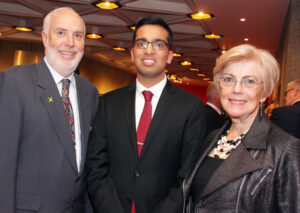 The award for Outstanding Small Business Philanthropist went to the family-run Canadian Tire on Terry Fox Drive in Kanata. It was accepted by David Malcomson, with his wife Pam at his side.

They were nominated by The Royal Ottawa Foundation for Mental Health. It should have won its own award for best introductory video of the night, thanks to its special appearance from former Sens captain and mental health advocate Daniel Alfredsson. He played the role of a pleasant and helpful Canadian Tire employee.

Kelly Funeral Homes was this year’s Outstanding Corporate Philanthropist. The award was accepted by general manager John Lafromboise, who, along with managing funeral director Rick Nolan, started working at the funeral home in the 1970s under its founder, the late Lorne Kelly. “Mr. Kelly instilled in us the value of community service and corporate social responsibility,” said Laframboise. “Quietly and conscientiously was his style.”

Kelly Funeral Homes was nominated by the Shepherds of Good Hope, which also nominated Keshav Goel as Outstanding Youth for his volunteer work, including cooking for the homeless and organizing clothing drives and fundraisers.

On top of that, Goel is studying translational and molecular medicine in the Faculty of Medicine at the University of Ottawa. He has also founded a national youth-driven charity with his brother, Anish, called Helping Hands.

The remarkable young man spoke of being raised in a loving and caring household, and of being taught the five human values of truth, right conduct, peace, love and nonviolence. He wasn’t sure how to apply these values to the real world, until he became exposed to homeless people during his commute to and from his downtown high school, Lisgar Collegiate, and uOttawa.

“I learned what a privileged life I live,” said Goel. “I saw the young adults and youth who are struggling to make ends meet and forced to sit on the curb each day, begging in order to survive through our brutal Canadian winters.

“They were the outcasts, ignored by the thousands of people who turned a blind eye to them every single day. For me, the human values I had grown up learning made me struggle with these images and inspired me to think of a solution.”

Attendees also received their own copy of the Giving Guide, a 76-page publication that highlights the giving opportunities in the region and provides resources on best practices and corporate social responsibility. It’s the second year the AFP has partnered with the Ottawa Business Journal and Foundation WCPD to spotlight the professional fundraising community and the value it brings to the city.